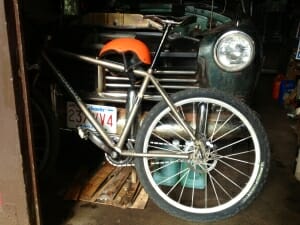 Bicycle Infrastructure: My bike weighs 24 pounds. The Hudson weighs about 3,600 pounds. In rush hour traffic I’m able to move across town faster on my 2 wheels than in the Hudson – or any other car. Enormous sums of fuel are burned in order to move the Hudson a city block. My bike runs for miles on a bottle of beer.

Bikers are building in numbers. Bikes are becoming a most popular way to get around . The Boston city reports that bike ridership increased 122% between 2007 and 2009. Bikes are moving art forms with a purpose. Pedaling is naturally occurring energy source.  A bike’s form-over-function design creates a balance that’s also minimal. Operating one requires burning calories for fuel.

When the Hudson is rolling, 99% of the weight being moved belongs to the Hudson. The 2 human passengers (me and Per) represent just .09% of the total weight. I weigh 170 pounds. So does my pit crew Per. As we motor in Mrs. Martin, our 1949 Hudson, our combined body weight of 340 pounds makes for only .09% of the total mass being moved (340 pounds for our combined body weights divided by 3,600 pounds of lead in our sled = .09%). Motorizing 3,600 pounds of steel to haul 340 pounds of flesh and bones is an energy suck. On my Independent Fabrication bicycle, weighing 24 pounds, I’m using 24 pounds of titanium to move 170 pounds of human mass while cleanly burning barley.

The Boston Sunday Globe ran a story on today’s front page (9-22-13) titled: “A cyclist’s mecca, with lessons for our town.” The piece spoke of how a bicyclist is 500% more likely to live when biking in the Netherlands than here in the US. Reporter Martine Powers wrote of how a bike culture was created after the 1973 Oil Embargo created by OPEC nations triggered the Dutch to think differently. The Netherlands banned cars on Sunday. The Dutch responded by taking to their bikes. Their government began building smart bike infrastructure. Some 25% of all commutes there take place on bikes.

Bike byways in the Netherlands adds up to 21,000 miles of dedicated bike lanes they call “cycle tracks.” Impressive considering that the Netherlands is slightly larger than the combined land mass of Massachusetts and neighboring Connecticut according to Powers. Here in America a plan began with a bang in 1982 to build a bicycle interstate highway system. It went nowhere until 2011 when the idea caught a second wind – thirty years later. But we’re a lagger when it comes to what’s going on beyond those dikes where bikes rule.

Let’s do it Dutch style. Let’s build bike lanes. Let’s burn beer – not biofuels. On the Dire States tour I’m going to rent bikes and hit the trails in search for that American bike highway system.

Getting involved means taking ownership. I need to go to the public bike meetings in South Boston where the debate over a bike lane down West Broadway is vetted. Broadway, the road running through South Boston, needs to go on a diet. The good news: Plenty of room exists to stripe 2 bike lanes, 0ne in each direction, on the bloated city boulevard.