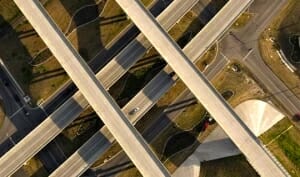 Roads: We’re highway committed. Road projects are the largest investment states make. Road projects are expensive, time consuming and are the most closely watched initiatives a state undertakes – fraught with political risk. When polled, 100% of the states ranked roads as one of the top 3 sectors of infrastructure. Ranking roads the top concern were 85% of the states. Systemic failure: In Miami, Florida congestion on I-95 at rush hour slows traffic to speeds of a bicycle – an average speed of 17 mph according to the ASCE 2013 Report Card for America’s Infrastructure.

The United States is defined by its road culture – its road culture defines the nation. We have more roads, more paved roads and more highways than any other nation on earth. 4 million miles of roads, of which 68% are paved. The US Interstate System is the most expansive superhighway net. The US Routes, turnpikes and other primary superhighways connects the nation’s centers of government and commerce. Over $100 billion is lost every year in unnecessarily lost time, burned gas, blown tires, bent suspensions, court costs, and accident damage.

Roadway usage has been rising steadily. Between 1990 and 2009 there was a 39% increase in motor vehicle mies driven. More usage, less investment leaves a broken system. Nearly half (42%) of all roadways are congested. Nearly a third (32%) are pot holed or pot marked. In the cities the situation is worse:  half of roads are badly damaged (47%).

Think differently – act differently: I’m advocating for non-road projects as a way to reduce traffic on the roadways. Bike paths, urban bike lanes, and better transit insure drivers that they’ll be fewer lane changes made by more divers. Getting cars off the road makes it better for those who refuse to surrender the wheel. Also, take a video of a crap road and post it. I bet you’ll get attention if the condition warrants immediate attention.