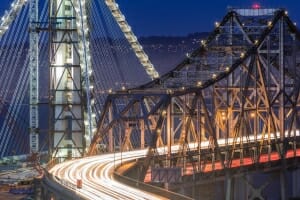 Bridges: The most revered superstructures succeed from failures. Bridges represent a nation’s strength – its weakness. When the I-35W bridge collapsed in the summer of 2007, a Chinese engineer and admirer of America said, “We didn’t think American bridges could fail.”

Engineering  makes its boldest advances from disaster. Since the height of the Roman Empire, and the Chinese before them, bridge collapses have marked improvements in bridge engineering. Bridges are a work in progress as methods, materials and policy evolves. The good news: Engineers obsess about problem solving – they hate failure.

The bad news: No matter how well designed, bridges will fail from willful neglect – a failure to maintain. Only after the I-35W bridge collapse in August of 2007 did states take a harder look at their neglected spans. Today, Americans are still making over 200 million trips over structurally deficient bridges. There are 607,380 bridges with an average age of 42 years. 1 of 9 are structurally deficient  according to the American Society of Civil Engineers.

Alarming: Major bridge catastrophes due to structural deficiencies and/or fracture critical designs in the United States have occurred at a disturbing rate. In 1967 the Silver Bridge between Kentucky and Ohio collapsed due to rusty eye-bar chains. In 1983 the Mianus River Bridge on I-95 in Connecticut lost its entire Northbound lanes after it was learned that inspections on the bridge weren’t carried out properly. That’s 2 collapses in 43 years. The I-35W bridge collapse in Minneapolis in 2007 was a result of neglect as much as faulty design. The bridge’s capacity was increased from 6 to 8 lanes while maintenance was continually deferred. Six years later in 2013, the I-5 bridge between Seattle, Washington and the Canadian border collapsed due to its fracture critical design. A single oversized truck hit a critical steel support member sending the bridge – and several drivers – into the river below. That’s 2 bridges down inside of the last 6 years.