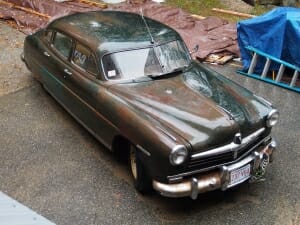 1949 Hudson parked amongst building materials of her host.

Full of challenges already – mostly of my own doing. Stayed up to 1AM. Stress is great. I asked for this though. Why? Why am I doing this, why am I so fortunate? We’re heading out into God’s Country. That’s what spiritually aligned folk from Pennsylvania call their state. Perhaps that was before they were deemed the stated with the most broken down, worn out and dangerously unkept bridges. Pennsylvania wish their superstructures had as little rust as Mrs. Martin has under her wheel skirts.

We’re heading over the Taconic Mountains, down the fabled Parkway of the same name that President Franklin Delano Roosevelt had a hand in building to his estate’s front door, and then to The Big Roads as Per calls the Interstate System. I-84 being the first red-white-and-blue shielded one we’ll land upon. Over the Hudson River and into the Allegheny Mountains.

Mrs. Martin continues to blend into the mountain foliage. My cousin’s contractors, who are helping in a total rebuild of her home that was previously in its own Dire State, nearly ran into her parked self in the driveway.