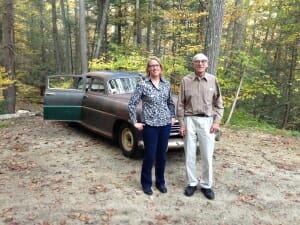 The Iron Lady took to the highway.  It was the first time we had her pointing West. On Saturday, October 5th Per and I shoved off from Boston. We were followed by Bill Elverman, Dire States media man who had a Go-Pro on the hood of his car to capture Mrs. Martin making her way over the first few miles of the Mass Pike – Westward. As the Mass Pike, aka I-90, the longest superhighway in America, stretched Westward, I thought how Massachusetts was one of the first states to build such a superhighway. They put up tolls to pay the bills of building. When Eisenhower launched the construction of the Interstate System in June of 1956, the Pike was grandfathered into the system and allowed to keep its tolls up in leu of receiving 90% funding for as the states who were building their new Big Roads.

YearsShe loves running between 60 and 65 miles per hour but we held her back a bit as she’s been through complete reconstructive surgery over the past 2 1/2 years after being stored – imprisoned – in a barn in upstate New York for a half-century. All trips in her over the summer of restoration and rehabilitation have been Eastward to Cape Cod. We hit Western Massachusetts in good time with Boston now about 200 miles behind us by 3PM. My cousin Danielle, and her husband Bo hosted us on our first night on the Dire States road.

Per remarked on how Mrs. Martin’s windows are clear – no tint. This, he said, and has said before, gives the fortunate in the Hudson’s seats a sensational experience. The yellows, oranges and bright reds blurred into a foliage kaleidoscope of Southern New England’s peak leaf peeking season. Per let me chill in the back seat where I feel like a slum dog millionaire being chauffeur driven in a rusty lead sled limo. As we bailed off the Pike and dropped south on the winding US Route 7 that follows the Housatonic River we benefited from the calming of the road. However, with our rusty yellow rims and rusty brown and fading green paint we look a bit like an autumn leaf. Our unfortunate camouflage along the winding Route 7 may have been our demise except Per was quick on the brakes when a local pulled out from their driveway in front of us.

When we arrived at the famous red Cornwall covered bridge, originally built in 1841, we banged a hairpin right up a hill with a grade greater than we seen anywhere else in the mountainous region. Per had to drop the Hudson into 1st gear which meant stopping. There’s no putting her into first gear while moving. Traffic behind us became a parade of unhappy mountain folk. We climbed the hill to my cousin’s home with satisfaction and gratitude to our motorized matriarch.