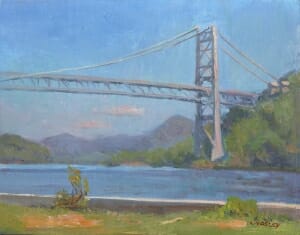 Bear Mountain Bridge spans the Hudson River south of West Point carrying US Routes 6 and 202. I crossed the bridge yesterday after my visit at West Point per the advice of my host. He suggested it as an engineering marvel of its day and today. I heard about the famed structure while researching the Bay Bridge history last year. Also, Jack Kerouac started his cross country journeys with a trip up to Bear Mountain in “On The Road” a favorite read of mine. The Bear Mountain Bridge was the longest suspension bridge in the world when it opened in 1924. True to his word, the bridge was a worth of the journey down river. Had I had time, I would have enjoyed walking over it.

When a bridge’s superstructure does not allow pedestrians the intimate act of a stroll over its deck, the public loses an important touch point. That experience is key. Case in point: The Golden Gate bridge is beloved. The San Francisco Bay Bridge is not. The difference is pedestrians have been waking the Golden Gate’s sidewalks for over 75 years. The Bay Bridge spent its first 75 years without sidewalks open to the public. The bridges are 3 miles apart. The Bay Bridge has striking views of its own.

The new East Span of the Bay Bridge  has just added a sidewalk to its new East Span on the labor day opening of 2013. But the sidewalks ends before you reach even the halfway point. It’s going to take perhaps another 10 years to get a sidewalk if ever. This is not good. Today people are biking and walking on the sidewalk that deadens. They love it. They deserve a walk all the way across.