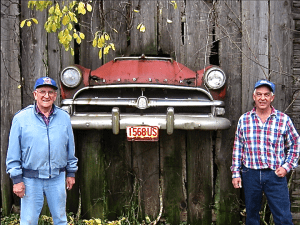 Noel and his brother Olin are farmers in Ohio just north of Dayton. They are also Hudson men. I was a stranger the first time I called Noel (right side) ten years ago. Still he climbed off the roof of his barn while fixing its weather vane to take my call. He did so because his wife told shouted up to him that a ‘”club member” was in need.

The night I called Noel from Barkerville, PA, I was in a similar jam that I had been in ten years ago. Mrs. Martin was running rough and Per and I were seeking the counsel of a another Hudson sage. Noel, besides being a farmer had run a transmission shop back in the day. He was in the midst of harvesting his soy bean crop. Still he made time to talk engines.

My phone battery was dying and its charger was 100 miles behind us at the Carnegie House room we checked out of back in State College, PA. So Per and I spoke quickly while relaying critical information to Noel ahead in Ohio about a fierce rattle the engine made between the highest point on I-80 East of the Mississippi River and the end of the Chesapeake Watershed. After a frank discussion of our concern over engine noise, Per and he worked together as I relayed information Noel was giving and the vital signs Per was reading. Per pulled the No. 4 piston’s spark plug and felt compression. Regardless of why, this was badly needed good news. Once again Noel was there for a fellow “Hudsonite” in a dire straight.