Per and I returned to Mrs. Martin to her  place of birth yesterday, Detroit Michigan. 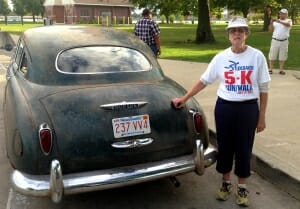 Per, needed sleep after a week of hammer heading, road side mechanics and a long drive from Cleveland. Per rarely requests sleep so hearing he was tired I cranked the wheel, rolled down an exit numbered 37. I found a Motel 6  with a drive through window – a first for me. After checking in without leaving Mrs. Martin’s couch like seats I tucked Per into bed. He crashed for 14 hours. This Motel 6 abuts the southbound on ramp to a loud concrete superhighway known as I-75. I inquired about a quite room for Per overlooking another drive-throuh window this one at a McDonalds. Per frequents McDonalds with joy. Now he was able to pull the curtains to our room and see the Golden Arches with its tag line: “Billions and Billions Served.” Once he was tucked into bed, I headed into the Motor City where cruising was created.

Woodward Avenue is Detroit’s main drag, its Main Street, is where American youths, decedents of car factory workers and executives, first took their parent’s cars packed with friends for joy rides. These kids made Woodward Avenue, the city’s main drag their destination. The city is divided by East and West and Woodward is the border line. This lore was confirmed as true to me by Sandra Studebaker. Yes, she’s a direct descendent of the car of the her name. I met her in Belle Isle park, a beautiful island park in the middle of the Detroit River. This puts it between Canada and the United States.

“What year is your Hudson?” asked Sandra Studebaker. I had never met her but she seem like a lost aunt. She’s lived in Detroit nearly her entire life. A libraian, she also recently finished the Detroit Marathon. It takes participants over the Ambassador Bridge into Canada and back to Detroit by way of the Detroit Windsor Tunnel. She loves her town even though its down on its luck. Funny, Sandra and Per could be twins – they were born the same year, have tons of energy and love cars. “Oh, you friend likes Packards? You know that Packard and Studebaker merged years ago.”