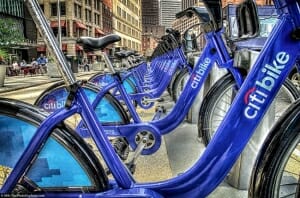 Phoenix, Arizona went by way of New York City by rolling out a bike sharing program of their own called The Grid. This is a near copy of New York City’s bike share program called Citi Bikes. Yesterday, Phoenix Mayor Greg Stanton added to the city’s mass transit system. Who knew the city in the desert known for its sprawl would be promoting bikes as a form of transit? New York City’s commissioner of transportation joined Phoenix Mayor Stanton at the October, 2013 unveiling. She hit 2 points driving infrastructure today: Cities and States are on their own. People are demanding smarter ways of paying for infrastructure and wanting projects and payments to be exacting. Two quotes from the event:

“We can’t rely on the federal government. If we want to advance our city, we have to be more self-reliant. We can’t design a big project and then go to Washington and hope they’ll pick up 80 percent of the tab like maybe we did in the past. The old relationship between cities and the federal government has broken down.”   Phoenix Mayor Greg Stanton

“If you can show the business community the economic development impacts, if you can show the public, you’re going to be in a much stronger position if you’ve got the data behind you. Local measures pass as long as the revenues are dedicated in the lockbox to a specific purpose. The public is totally fine with supporting something if they know they’re gonna get X for it. But you can’t just be like, ‘I want transportation improvements.’ It has to be very specific.”  Transportation Commissioner, New York City Janette Sadik-Khan