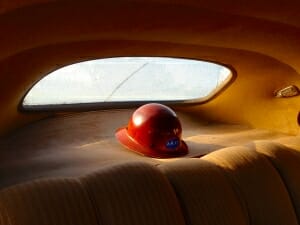 The shelf over the back seat in the Hudson has now become a shrine to brave workers underground, at ground and above ground. In the back window is a hardhat. This is no ordinary hardhat. It’s type every tradesmen covets. The gear was a gift from a Sandhog, aka: tunnel worker. I met the man, Jason Burroughs, in a $190 million, 4-mile long tunnel called the Deep Rock Tunnel Project. We were 250-feet below the earth bonding over building heavy. Jason is one of the most focused men I’ve met on a construction site. He’s in charge of safety. It’s no surprise this tunnel project is one of the safest jobs ever.