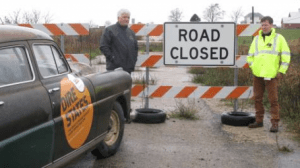 ISA director Paul Rasmussen and I visit the Keslinger Road Bridge in Afton Township, DeKalb County. The bridge collapsed in August 2008 after a pick-up truck drove across it. Paul told me how the driver felt it shake as he passed over it. He stopped once he cleared the structure, then turned around and saw the bridge built in 1976 collapse. Now, farmers have a 16.7 mile detour. The fixing of the bridge has been tied up in court.