Skip to content
Gussying Up for Dire States Denver Event 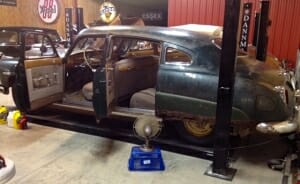 Mrs. Martin’s Spa Appointment: Fort Collins, CO: 11-22-14: Bill & Jane Lentz are Mrs. Martin’s host for the Thanksgiving Holiday. Bill is drying her out in his Hudson filled barn (a museum of over a dozen gorgeous Hudsons) after I gave her the first bath she’s had in over half a century. The washing, just before I departed home to Boston for Thanksgiving, left her woolen seats damp. Now, in full spa treatment form, Bill is drying them out with a floor fan. Jane plans to bomb Mrs. Martin’s interior. It was attacked by moths and mice. Adding to her beauty challenges, the upstate New York roads of her yesteryear were mud, dirt and dust filled. Now her upholstery is laden with barn dust and caked with red clay from the old byways. All this beautifying so she’s ready for the Denver Dire States event on December 3, 2013.