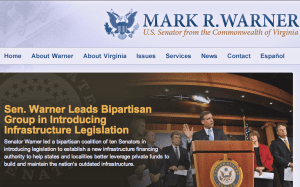 Hey Danny!
By the looks of my inbox, your efforts are paying off!  Hope this is actually a good bill…..
Happy Thanksgiving to you and the clan, wherever you may be!

What Teddy sent was a link to an email pushed onto to him by his US Senator Mark Warner of Virginia. The note asks him to sign in and support the senator’s infrastructure initiative, a bill called Building and Renewing Infrastructure for Development and Growth in Employment Act or The BRIDGE Act. The aim is to get $10 billion in seed money to start a national infrastructure bank as opposed to state infrastructure banks. Some states already have them – many do not. A federal bank, it is reasoned, would bring along those states not yet funding their own institutions. All this so we can rebuild broken systems that are leaving us disadvantaged when it comes to economic competition. I agree.

The Dire States of America need centralized coordination when it comes to rebuilding the nation. President Eisenhower saw this when he began the national infrastructure building campaign called the US Interstate System to supersede individual state plans to build smiler roads. Bringing our infrastructure into the 21st century requires a holistic approach best done with a centralized effort so each of the 16 categories, as laid out by the American Society of Civil Engineers (roads, bridges, airports…), can be viewed as one. Funding, as a result, would hopefully be spent where it ideally will have the greatest impact for the most citizens. Realistic? That depends on your level – or lack of – optimism.

Applauding the Senator’s efforts I signed up to support BRIDGE. Instantly I hit the wall, the one asking for my credit card number. The Senator, wanting in my wallet, was seeking a campaign donations for his re-election. Perhaps this why I am not a fan of Congress these days. Regardless, I’d rather crowd source the repairs of a broken bridge.