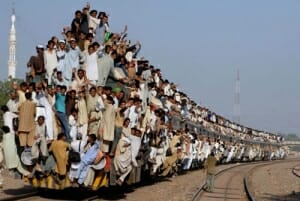 A nation’s successful coordination of investments in infrastructure produce powerful results. In the early 1980s China and India were on equal economic footing notes the World Bank. Deng Xiao Ping, the leader of Communist China at the time, launched a peaceful revolution towards prosperity. His efforts mirrored those of Dwight Eisenhower, a contemporary of Ping’s, a few decades earlier in the United States.

The former peasant, Red Army General and world leader systematically began investing heavily in his country’s infrastructure. Ping launched  what became the modernization of The Peoples Republic of China. First he concentrated efforts on building a modern superhighway system similar to the ones in Europe and the United States. Then Ping directed improvements to the nation’s ports, railways and airports. As a result nearly half a billion Chinese were lifted above the poverty line inside of 20 years. China’s economy reached annual double digit growth into the 2000s.

India, by comparison, underinvested in its infrastructure. As a result, its economy saw little significant growth during the same period. Today, China’s economy is many times larger than that of neighboring India. India and many other nations are struggling. They are unable to make needed infrastructure improvements.