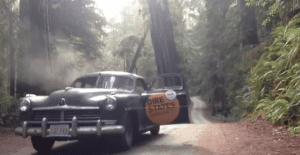 Leaving Seattle I headed south in the fog and rain. I spent the late afternoon driving while contemplating a manageable morning in Portland, Oregon. I’d have a cup of the town’s famous coffee in hand. But driving into a dark December rush hour I was tired. Portland looked too big to be fun, cheap or easy. Crossing the Columbia River in the dark I was awed by the 405 as it shot off in pure science fiction over the Willamette River over an old steel truss bridge. I thought Portlandia a smaller town. Judging through the right side windows I ruled the mysterious metropolis steely. I opted to keep on along the 5.

The following day I climbed, dove and finally landed the terra-plane in Crescent City, California. It was a wild ride.There were tough looking people along Oregon’s parts of the Interstate. Making the breakdown lane their hiking trail these grunged folk were overburden with their belongings. They blended into the dark earthy mountains. The evergreens, piles of snow and blue sky made the drive pleasant. At Grants Pass I peeled off the Big Road and headed towards State Road 99 that eventually took me to US 199. Ray Speck, my boat’s master builder back in Port Townsend had suggested this route in case of snow. “You enjoy the ride – rolling along the road,” he promised.

Ray’s recall of the road was right on. US 199 was a thriller. I was chasing the sun as it was dropping behind the mountain peaks. Mimicking the Smith River’s curves and rapid decants, US 199 was either rising, falling or curving. It was getting dark when the moon was clearly in the Eastern sky. Heading towards sea level, Mrs. Martin and I made our way to towards the coast dropping into pitch darkness. It seemed like the trip was not going to end or end well. But, I popped out into the town where I met a man who had returned from oil work in Alaska. The pay here is next to nothing. But, you got to love the weather said the stout one with a red goatee. “That the worst road in America,” he said at the gas pump. “It’s like a goat trail.”

The hotel clerk, a man from Hawaii who just moved to California a year or so ago, suggested I drive into the Redwoods in the morning. “Go to Stout Grove and get out and walk around. Everyone thinks that the National Parks aren’t any good. I’m telling you this state park is the best place to see the Redwoods. It’s an old logging road” Turning off local roads until there were no more I took a road that looked at first too narrow for the old girl. Once in the Redwoods I was driving on dirt. I was in awe among the giants.