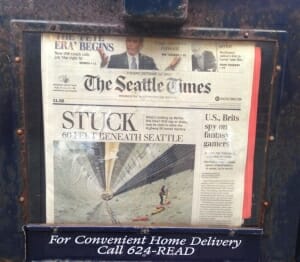 “STUCK,” read the headline of the Seattle Times on December 10, 2013. The world’s largest tunnel boring machine came to a standstill about 50 feet beneath Seattle’s downtown. The giant rig, known as Big Bertha, ground to a halt 1,019 feet into her chartered course of 10,289 feet. What is stopping her remains a mystery.

Big Bertha came to a standstill while digging a nearly 2 mile long, 4 lane, highway tunnel costing $3.1 billion. The mega machine, whose namesake is Mayor Bertha Knight Landes, the first woman elected to mayorship of a major US city, is being challenged to dig a large tunnel to replace the Alaskan Way Viaduct, a dangerously old elevated highway along Seattle’s waterfront.

The project, launched in January of 2011, is officially known as the SR 99 Bored Tunnel Alternative Design-Build Project. The mega work is likened to The Big Dig, another underground urban highway endeavor which replaced another waterfront elevated highway – that one along Boston, Massachusetts. That project, offically known as the Central Artery Tunnel Project, was completed without a Tunnel Boring Machine (TBM). Work on it wrapped up in 2008 at a cost of approximately $15 billion.

Complicating construction logistics at the site of the Seattle project are the embarkations and debarkations of commuters tourists as well as the movements of cargo. Washington State Ferries and ocean going ships along Seattle’s busy working waterfront take place in the shadow of the Alaskan Viaduct. Also in the immediate area are tens of thousands of Seattle Sea Hawk and Mariner fans jamming area roadways while attending games at adjacent stadiums.

Experts fear the early 1950s elevated highway, a heavily congested commuter route, will collapse should another powerful earthquake strike the Pacific Rim city as one did in 2001. Over ten years ago that earthquake severely damaged but did not destroy The Alaskan Way Viaduct. Highway structures built before 1990 were not designed with features used today to keep them standing after intense seismic activity. 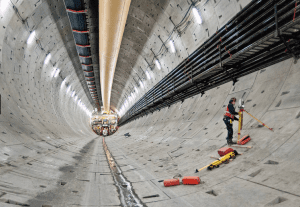 Inside Seattle’s new tunnel. The tail end of Big Bertha is in the distance. A surveyor is at work while standing on the concrete liner of the new 2 story tall highway tunnel.

Big Bertha got stuck inside of Zone 1 which sits in the middle of the busy port area. Washington State Department of Transportation (WSDOT), the owner of the old viaduct and new tunnel mapped 10 eventual work zones that Big Bertha is set to pass though. Prophetically posted on agency’s website is a bit that portends the current situation: “Think of it this way: if Bertha were learning to ride a bike, Zone 1 would be her training wheels.” Put another way: Big Bertha ran into problems during her trial-and-error phase.

Mysterious is whether the object blocking progress belong’s to mother nature’s or mankind. The area of Zone 1 was created by Seattle’s early settlers who cut down the hilly terrain they inhabited and used the excavate to create real estate along the commercial waterfront. Today, geologists, archeologists and lay folk are engaged in an unofficial contest of predicating what has stopped Bertha. Predictions range from a glacial boulder, a sunken sailing ship and even abandoned public toilet facility – a world class one in its day.

Project managers predicted that Big Bertha’s early work would progress at a crawl: 6 feet per day. Later she is supposed to cruise at 36 feet per day. Those who know tunneling say Tunnel Boring Machines like Bertha are designed to free themselves form expected hangups by reversing a bit so obstacles in the way can be cleared.

“We’re going to get her going again,” assures Daren Konopaski, the head of the International Union of Operating Engineers, known in Seattle as Local 302, the arm of organized labor representing unionized heavy equipment operators in Washington state. “We sent several of our members to Japan to learn how to operate

[Bertha] before work on her fabrication was finished. “This is the type of challenge our brother’s and sisters in the trades live for. We’re eager to free Big Bertha and get on with delivering the job.”

Compounding the danger to public safety, the viaduct is a product of urban renewal gone wrong – a hulking double deck superstructure that connects the city as much as it divides it. Traffic runs constantly along the elevated road that connect Seattle’s Western neighborhoods to Interstate 5. Simultaneously, the giant roadway has separated Seattle from the its busy waterfront for over half a century.

“When I was a kid my father took me downtown while the Alaskan Way was under construction. I remember my dad saying he’d never seen anything like it,” recalls Ray Speck, a master wooden boatbuilder and longtime resident of Port Townsend, a seaport about 40 miles north of Seattle. “It was out of the future – a highway way up in the sky with these wild ramps emanating out of it”

Supersized in Seattle
Bertha was greeted with fascination when she arrived into the Port of Seattle/Tacoma from her birthplace 5,000 miles away in Osaka, Japan.  A specialty ship carried her 41 pieces across the Pacific Ocean to waiting customized trucks on the docks of the Port of Seattle. Specialized rigs towed her parts to a heavy lifting crane capable of hoisting her largest section of 900 tons. From street level Bertha was lowered into a 6 story deep launching pit, still in parts and pieces, that had taken 300 workers a year to dig.

Inside the launching pit the 325 foot long TBM was assembled into one machine. The digging began on July 30, 2013. When the highway tunnel is substantially complete in 2016, the launching pit will have become the new tunnel’s Southern portal, the eventual entrance and exit to the underground highway now being built.

When inside of the 7,000 ton cylindrical behemoth, you feel as if you are in a subterranean ship or earthen submarine. Adding to the feel of a vessel on a mission are the grave faces of Big Bertha’s 20 plus crew. Crewmemebers are currently taking advantage of Big Bertha’s downtime by performing needed maintenance. The underground vessel is also being readied with supplies for its earthen journey – a voyage expected to take over a year.

Greg Hauser is the Deputy Project Manager for The Seattle Tunnel Partnership, a construction joint venture between Dragados of Spain and Tutor Perini Corporation of Sylmar, California. Hauser speaks with the certainty of an expert and the passion of an intense practitioner. “This tunnel is going to be completed on time and on budget – this is no Big Dig project. That project regretfully gave tunneling a bad name. Adding, “Every city should have a big tunnel underneath it, “This is a work of art. And when its finished, it’s going to be beautiful.”

Washington State Department of Transportation simply says that the public will have to wait until the new year to learn what’s blocking Big Bertha’s path.