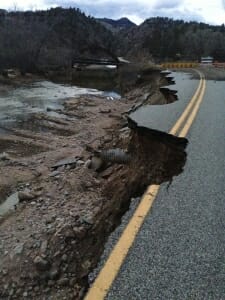 Deputy Fire Chief, Paul Davidovich:  a US Marine helicopter pilot, retires to the Rocky Mountain town of Lyons, Colorado and builds a log cabin for he and his wife Maureen. All is well until ten years later when a biblical flash flood rips through their remote village in the dark of a September evening in 2013. The town’s lifeline, US Route 36, is swept away by an angry North Saint Vrain Creek which turns into a torrent of whitewater. Washed away is the town and the chief”s fire truck along with one of its citizens.
The Federal Emergency Managment Agency (FEMA) officials arriving on the scene remark that they’ve seen the worst of America’s natural disasters. Never has a town’s infrastructure been gutted so deeply. Unprecedented: utilities buried deep below ground have disappeared – washed away.
Winding, climbing US Route 36 is the only way into and out of the canyon that Lyons occupies. The two lane highway brings hikers, kayakers, mountain bikers and gaggles of tourists to town. More importantly, emergency medical services, foods, and fuels needed for daily life pass along it daily. Suddenly an emergency zone, the National Guard deploys Blackhawk helicopters – the one way to reach Lyons.
Driving in the town’s newest fire truck earlier that night, Cheif Davidovich and his crew are responding a low level emergency – a car and driver in a ditch. Portending the coming disaster, rainfall is getting heavier by the minute. The crew spots the distressed driver who is found standing on the roof of his car. River waters threaten to sweep him away. The crew pulls him to safety and immediately begins a hasty descent along the mountain road back to the firehouse. Suddenly the river rises over the roadway in front of the truck. The town’s prize purchase is adrift.
Coming to rest against a giant Ponderosa tree that has fallen across the river, Cheif Davidovich calls for all to abandon the truck and head up a cliff into a cave for protection. The only way off the truck to land is by converting the truck’s long extension ladder into a bridge to the ridge.
In the morning the former Marine helicopter pilot begins a house to house search for others stranded. Mapping out households of those in need of first aid, the Cheif spots a Blackhawk helicopter form the Colorado National Guard. Signaling for the chopper to land Cheif Davidovich directs the pilot and crew to begin evacuation of those most in need. Three days later the Cheif and his men return to town to find little of what they knew to be.
Sewage flowing into homes, schools, and government buildings forces a complete evacuation of Lyons. Rugged folks by nature most of the town’s citizens’s refuse to leave. Police assisted by the National Guard force them out. Heavy equipment is called in and used to rescue stranded people in and around town. Emergency dikes are built along the still angry river. The US Army Corps of Engineers arrive to immediatly begin rebuilding US Route 36. Rescue and rebuilding takes place along the road. There is not a choice but to rebuild the highway – its a way to life in Lyons.
Dan McNichol2017-05-12T14:11:09+00:00